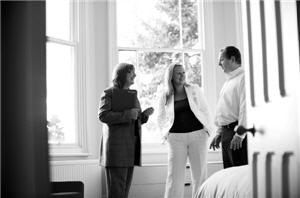 The BBC’s The Apprentice is hitting the headlines at the moment for all the wrong reasons.

Ousted Selina Whatever-Smith has been shouting from the rooftop that it’s a fix on social media and all the UK papers (although we don’t know why she needs to do it in her underwear – surely doesn’t help her credibility), while Scott Saunders throws in the towel because he was fed up with the process.

The awful antics of the candidates makes me cringe at the best of times… But when I heard this week’s challenge was selling property, I knew I would be watching from behind the sofa…

While last night’s show was the most eventful of all so far in this series (a nasty café cat-fight, a surprise departure and some downright dodgy suits.. ahem, Joseph) the actual task took a bit of a back seat to the drama.

But we were sitting on the edge of our seat, watching those prospective buyers looking around half-built show flats (when even available) and dodgy residential conversions. Now we know the London market is hot… but seriously this looked all too similar, something many Irish property buyers from about 10 years ago would recognise all too well…

Suspend belief for a second that buyers would buy an apartment from an Apprentice candidate in a one-day sale (they were only paying a booking deposit after all, probably a couple of £1,000). It was the fact buyers were rushing so eagerly into it without even much thought that worried us. “My husband will kill me…” one woman said as she signed off her deposit.

The new build stuff in Canary Wharf I can understand, and even Stratford has changed remarkably in the last decade. But that ex-office block in Lewisham?! I worked in the UK office market for years, buying and selling ugly buildings just like these. And not once in 100 transactions did anyone ever get the notion something like this would make a good apartment block. Knock it down and rid it from the earth, I’d say!

Is the writing on the wall for the London bubble?

This type of buying just smacks of irrational-exuberance we saw in the last boom. Middle-class earners putting their savings or house-price profits into Buy-To-Let apartments for their retirement – in a potentially ill-fated attempt to cash in on the property boom.

We’ve seen it all before…

Surely we should shout across the water and tell them not to make the same mistakes we did. But the answer would be as always “London’s not the same as Dublin, we have a stronger market and diverse economy…“.

And that’s fine. Until it isn’t…

We’ve seen first hand how government intervention can sway a fragile market. The Central Bank of Ireland ruling in January of this year to restrict mortgage lending has had major consequences to the recovery of our property market.

In the UK the government have relentlessly gone the other way over the last decade, adding incentives and schemes (Help to Buy, Shared-Ownership, New Buy) to help buyers on the property market and fuelling a potential bubble.

Is this the beginning of the end…?

But now for the first time, the UK government have stepped in to dampen the demand and ability to buy. They have already changed Stamp Duty levels into a more progressive system, with steeply higher percentage rates for properties over £1 million. But now in a surprise assault on speculators and investors, George Osbourne has thrown in a new 3% surplus Stamp Duty rate for all properties bought as a Buy-To-Let or second home.

And that’s only the start of it. Barclay’s bank today indicated that access to mortgages for Buy-To-Let is also going to be tightly restricted. Investors might need significant cash piles – at least to 50% Loan To Value – to qualify for a mortgage with them.

So what happens next…

Every age has its peculiar folly: Some scheme, project, or fantasy into which it plunges, spurred on by the love of gain, the necessity of excitement, or the force of imitation. Men, it has been well said, think in herds; it will be seen that they go mad in herds, while they only recover their senses slowly, and one by one! – Charles Mackay, 1841

As we all remember too painfully, a turn in the market and subsequent fall can be swift and shocking. And I’m not saying the UK market is definitely screwed, or won’t bounce out of it like it did in 2008/9.

I completely believe there is strong international demand and a fully-functioning, industry-diverse economy in the UK (particularly the South East)… something Ireland’s economy didn’t have the post-boom years because we were too reliant on a small handful of industries (Construction, Farming, some Pharm and Tech).

It’s just a gut feeling that when we look back on disasters of the past, the beginning-of-the-end moments, there’s always one piece of media that becomes an obvious-with-hindsight beacon of the high water mark…

In 1920s New York it was “getting stock tips from the shoeshine boy” to quote a Kennedy. In our last boom it was probably when The Irish Times property supplement and interior design guide was thicker than the main paper.

“Yes, yes that was when we should have known we were in trouble…”?

For more: How London developers are coming up with more and more ridiculous advertising campaigns and slogans – The Guardian

Irish Home - 9 December 2022 0
This week in the news section of the Irish Home Show podcast, I discussed the lastest study from comparison website, Switcher.ie. They've announced the...

10 tips for applying to the Bank of Mum and Dad