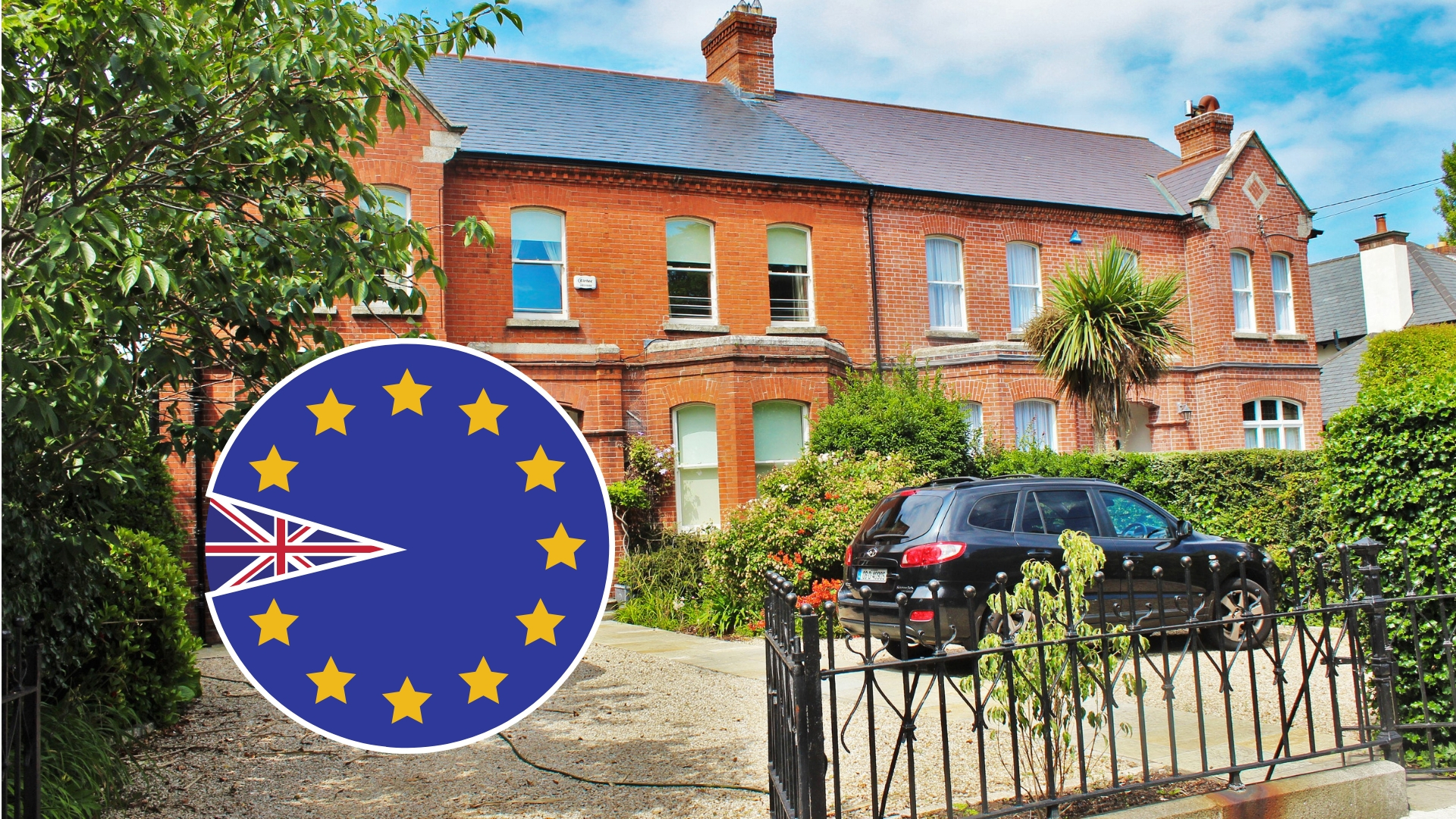 As a Brit living in Ireland for the last 5 years I’ve come rather detached from UK politics until the last 2 weeks. I say only the last 2 weeks rather than the last 6 months of ‘Leave’ or ‘Remain’ campaigning because only in the last 2 weeks did I even comprehend the referendum wasn’t going to necessarily be a landslide for the status quo that I (a converted Europhile) expected it to be.

We’ve been so distracted by American politics sliding into a dangerous farce that we didn’t even notice the one closer to home. And although we can look on in dismay from across the relative safety of the Irish Sea, it won’t be long before we feel the effects here too.

Indeed, we already are…

And before I go on to outline the ways Ireland’s housing and property markets might be affected by ‘Brexit’, note that I’m referring to the effects of the vote that has just taken place. Whether Britain eventually actually follows through with it (which I sincerely doubt they will), far reaching waves are already rippling through the British, Irish, EU and even the world economies. The damage is already done and will take monumental change and too much time to be undone.

Here are three potentially damaging affects of ‘Brexit’ on the Irish housing market, and 3 possibly positive outcomes for balance…

The British Pound fell 10% on Friday, within hours of the referendum result being declared, and has since sunk to it’s lowest level since 1981. Overnight this has made buying Irish property with converted pound sterling 10% more expensive.

I have personally had two offers pulled this week, one from a Belfast investor and the other from a returning ex-pat, because the price they were paying jumped significantly.

And don’t think those are isolated cases. This will have a significant effect on two important ends of the housing market: €1 million plus homes nationwide; and investment properties (apartments and small houses, mainly in Dublin or Cork).

As The Irish Times reported in February, 60 percent of buyers of plus €1 million homes are international, 40 percent of which are from the UK. The uncertainty alone is going to severely affect their willingness to buy and the weakening pound their ability to be competitive.

The Irish housing market has already been teetering on a knife-edge for over a year. While supply-constrains are keeping Dublin prices buoyant, confidence amongst buyers is often wanting and even if they can access finance successfully, many are nervous about buying at the moment.

Philip Farrell is correct in The Independent yesterday when he says:

One common theme among all agents is the continued difficulty of bringing properties from sale agreed to sale complete, primarily because of difficulty in drawing down finance due to the onerous requirements imposed by lenders.

We are seeing 1 in 4 sales fall through the first time around, not just because of bank restrictions, but also nervous purchasers looking for any excuse to hold back or pull out.

With the UK economic outlook bleak and the EU likely to catch the contagion, it’s only a matter of when we feel the tug of a returning recession.

House prices in the UK, and especially London and the South East, have been rising consistently since 2009, after only a brief dip while Ireland went from boom to bust.

Overall house prices are at vertiginous historical highs even when compared to average earnings. The government has allowed this growth to be stoked by prestigious lending that would even make a 2006 Irish bank manager blush – they’ve even greatly helped with first time buyer assistance while our Central Bank here has made it harder for them to borrow.

Yet many considered the market was getting to a tipping point and even London as a magnet for international investment was beginning to show signs of weakness. Brexit may just be the thing to tip their market over the edge, with catastrophic consequences.

Indeed, even before the referendum, Chancellor George Osborne warned that house prices could fall by 10pc to as much as 18pc by 2018 in the event that the British people vote to leave the EU.

While a falling house price market of an isolationist UK outside the EU shouldn’t really have a direct effect on Ireland, rapids falls in our closest neighbour will certainly shock confidence in our market that will take us over the edge with them. It’s easy to dismiss how much confidence effects a market, but remembering the boom and the bust will remind us how market sentiment – whether up or down – can lead to a disastrous spiral.

Here I defer to the eminent David McWilliams, always inciteful on matters of global economics and politics. He argues cogently (It’s time to act in Ireland’s self-interest) that Britain’s loss is Ireland’s gain. We’ve been successful as a English-speaking base of operations for thousands of international corporations looking to have a presence in the EU and the Euro. Now Ireland is the only option in all those regards.

We’re already fairly save in the knowledge that the next Facebook or Google that is looking to be in the EU will come to Ireland. But perhaps next time they want to build up a sizeable global operation they won’t split themselves between Dublin and London (like Google who for all their size in the Dublin Docklands have more than double our numbers in London). Instead they might base their entire operations here with thousands more jobs and investment into our cities.

2) Coming Home to stay in Europe

The scale of the fall out in the UK is yet to be fully ascertained. But at the moment there is solemn shock and disbelief among the 48% (and probably many more). Many of the tens of thousands of Irish in the UK feel that pain. Most were pro-Remain, urban dwellers who have seen the benefits of the EU project first hand in Ireland’s economy and infrastructure.

With dramatic scenes of racism and anti-immigrant outbursts in the last 4 days (although none against their Anglo-saxon brothers) it has left a horrible taste in the mouth and many are considering what sort of country they really live in.

The Times interviewed a handful of expats who already had decided to make the move home, such as Jude Flores, a teacher in Bedfordshire:

I don’t plan on staying here now long term. The campaign has revealed a rotten, intolerant xenophobic element in British society…. Now to make a plan to move back to Ireland with my daughters. My youngest is 11 and wants to leave now.

While it is sad for many who have made a life over there, the return of many expats would be a great thing for Ireland (not just for their delighted mammies). We need more highly trained professionals across all business sectors. From doctors and nurses, to IT professionals, game designers and film creatives.

The construction industry desperately needs skilled professionals to pick up the shortfall in labour and allow us to build the houses these people will require. That does highlight another risk – our already under-stress housing market – which will need a shot in the arm if it’s going to keep up with many more households moving home.

Although seeming the main rallying point of the Brexit Leave campaign, immigration should not be feared in the way almost half the UK seem to think. First of all, both Britain and Ireland are relatively only the tip of the iceberg in the largest international migration since World War Two – thanks to our remoteness and natural defensive moat.

But migration should be looked upon as a positive in Ireland’s position in the EU. Our natural growth rate has been falling for years (although is still one of the highest in Western Europe). The UK on the other hand has a much lower natural growth rate and required immigration to make up approximately 50 percent of it’s growth in the last year.

While the thinnest majority of the voters in the UK might not understand the benefits of this, look to the Scandinavian countries who with desperately low birth rates are turning to increased and promoted immigration to prop up their ageing economies (‘Sweden will have to become a lot less blond’). The UK and Ireland will feel the effects of that too – ironic that those soon to be pensioners who voted to Leave the EU are the very ones who are the cause for a massive need for immigration.

Unfortunately for years Ireland has seen the continued emigration of our young people to foreign climes. European immigration is an important balance to keep up the numbers.

Finally, in the more immediate term, the free flow of workers is crucial to our new economy. Technology companies such as Google and Facebook attract and import vast numbers of smart, affluent employees from across Europe. Try selling an apartment in the Docklands area (like this one) and see how many enquiries you receive from people of nearly every European country.

If Britain goes down the route of anti-immigration and making it harder for highly-skilled workers in technology, banking and science to travel and work in the UK, then Ireland will happily reap the rewards.

I pray for my homeland, but also that we can weather this storm and continue to grow as a county in the European Union. Dublin feels back on it’s feet and the whole country should follow. Let us hope the British can sort themselves out before it’s too late for them… and us.

Irish Home Show 106 – How To View A Home – with Joanne Geary, MD of MyHome.ie

Irish Home - 13 October 2022 0
https://youtu.be/nAhfz3bhzqE This week we are continuing our guide to House Hunting in the Irish Market and talk through the best way to enquiry about a...